I have spent the last couple of days getting my affairs in order, not that I am planning to depart any time soon, just a case of sorting out a lot of old documenters and filing them away properly. It is about six years ago since I had a good clear out and many things quickly pile up such as old bank and credit card statements, plus multiple other bits of paper from house and car insurances to a myriad of other things. I also wanted to tidy up some financial stuff like bank accounts, shares, and some other investments that seem to have got rather untidy over the years, so I thought it was time to set everything out on paper so that when the time comes my children will not be hunting around to determine what is what and where. So far I have shredded a couple of black bags and my filing cabinet is looking less crowded, but I reckon it will take me another couple of days to get finished.

So on that basis I took Annie out for a stroll yesterday to give me a break, especially as the weather was really nice. We went on one of our regular routes passing the church and into the woods via the fields. Autumn is approaching fast and the leaves are falling from the trees, although without much colour in them. Everywhere is starting to go dry and brown and the Indian corn has been cut back to sharp looking stubble cane, this will soon be ploughed back in with a good quantity of manure ready for next years crop. We go the less muddy way through the woods and here it is less gloomy as the sunlight streaks through the more open canopy above us, Annie spots the stream and is off like a shot for her paddle and after running through the fallen leaves she heads for the bridge. It always makes me laugh as being so small she barely makes it up the steps, but always tackles them with gusto and is soon over the stream. 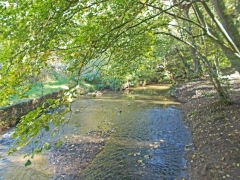 There is lots of Himalayan Balsam spreading up from the stream and it brightens up the otherwise dull scenery with its mauve orchid like flowers, it is rapidly becoming a pest and I see it invading everywhere we walk, it seems to spread along any stream, watercourse or indeed any damp area such as field drains and gullies. 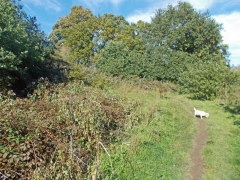 We passed the old Badger set and it looks as if they have returned as I spotted a couple of new burrows, I have yet to see the Badgers, but I see lots of signs that they are in the area. Maybe one day I will leave my wildlife camera set up to watch the set, but to be honest I always worry that some chancer sees it and makes off with it, so I have not yet come to terms with doing that. Many fields that we pass have new Winter growth sprouting after being ploughed and harrowed some weeks ago, we even passed a field that had just been mowed, probably as silage as the Summer had been so dry and maybe the usual hay levels were down. On the way I partly hid a painted stone, this is a relatively new activity started originally by some schools as an interest for the children. The idea being that they would paint a rock with some sort of design and include a FaceBook link for people to report finding it. It is then requested that they move it on to another location to be found again, the kids seem to love doing this especially the little ones and it is amazing how far some rocks will travel. My son is amazingly adept at spotting these hidden stones and he often moves them elsewhere, he found three during our weekend in Wales. Many adults now join in this fast becoming more popular activity and most areas have a FaceBook site. I think its a great idea for the kids and I also on occasion paint a few special rocks and secretly hide them away for the kids to find. The young ones out with their parents have something to look out for on a walk and they get so excited when they find them, but typical of young kids they want to keep them. To that end all of mine will say ‘Keep or move on’ on the back, that way it avoids tears.

Here are a few of mine ready to go out The idea is to partly hide them, in other words to put them somewhere obvious if you care to look, its no good hiding them too well. This was ‘Tinkerbell’ left on an old stile partly hidden by brambles. I sometimes lose a few before I get a chance to leave them out, this one was purloined by my DIL for her own collection after she saw it. We returned the usual way along the canal and it seemed that many people were out enjoying the good weather so several chats along the way added to our time out walking, then it was back home to a very nice chicken stew that I had going in the slow cooker. Lovely photos of a lovely day H and I do LOVE your rocks! I've tended to paint them but only Ladybugs. I've got mostly red ones but some are yellow and others are a turquoise green.

This 'finding' of rocks here is the 'finding' of fairy doors. People here have made these little doors and then put them into parks for kids to find and same idea of taking them but relocating them elsewhere. To my knowledge there are no directions associated anywhere on line about this but I can see that having that would add another dimension to the fun.

I used a Mod Podge type sealer on the rocks I made - is that what you're using? It is a clear substance (and I do 2 coats) that does seem to keep most of my rocks good for 3 to 5 yrs before you start to see lots of hairline cracks appearing.
Top

I just use can of DIY spray varnish, usually a couple of passes in one go and then dry in a couple of hours.

Spray Varnish ....... hmmm. I've heard of varnish but never "spray" varnish. Once I'm done with my 2 pints of ModPodge stuff I'll look into the spray stuff. Mod Podge really isn't for stuff outside. It is a good sealer and you can get shiny or matt finish but it does deteriorate over time.

What type of paint are you using underneath? I'm using plain out ceramic paint. Years ago in the USA I bought a box of almost every colour imaginable at a garage sale for some ridiculous price of like $2 for 100+ full bottles. I get the grandkids to paint with these any chance I get and VOILA after 10 yrs I'm down to probably 80 jars (I'll NEVER use it all up) BUT when the Grandkids splop it it washes up easily (which being water soluable means it doesn't do overly well painted on rocks)
Top

Lovely photos of your walk with Annie

What a great idea of leaving stones hidden for the children/adults, I'll have to check if they do

Interesting report on your walk H

Grandad it can be tracked if the person finding them observes the protocol which is to take a picture with your phone and then post it on the FaceBook page that people write details of on the back of their stones. You then move it on to another location and so on, for example the ones we found in North Wales were re-hidden in Cheshire. I always add a Facebook logo in blue and white plus a local rock club page alongside it, but as I mentioned earlier some little kids can get a bit upset if they find one and mum or dad says they have to put it back somewhere else,

hence mine always say "Keep or Move on"

It's very big down here in the south. I've seen quite a lot on Facebook.
Top

Sorry LLL, I forgot to answer your question regarding the paints I use, currently I am just using up some water colour tubes of paint. I find that if I use them neat or only add a dash of water on the brush it is OK, but of course it would just wash off if they were not varnished, hence using an aerosol spray and not a brush to laquer them.