It was a bright morning yesterday so we went for one of our usual jaunts for a walk and morning coffee. In this south east corner we do not have the stunning scenery of the pennines, the dales or the highlands that some members have. We do however have quite a lot of social history stemming from the Victorian era and happily evidence of much of that heritage remains today.

I have posted in the past about The Crab and Winkle Line; the first ever scheduled train service between Canterbury and Whitstable that started in 1830. I have also posted about our trip on the paddle steamer Waverley from Whitstable to London. This restored steamer is typical of those that plied between London, Medway and the North Kent coast towns from Victorian times until the mid 1900’s. The beach huts at Whitstable have also proved to be of interest to members.

We started at Tankerton and walked along to The Continental Hotel for coffee. This is a rather quaint hotel from the 1930’s with something of an art deco style. Walking back, the single item that caught my attention was the Lifeguards station standing in isolation on a deserted beach. Some graffiti vandal could not resist the inviting plain side and daubed his tag across it. I thought it made quite an interesting picture nonetheless. Moving on from Whitstable and Tankerton we went the few miles east to Hampton, just west of Herne Bay, a north Kent coast town that I have not mentioned before. I particularly wanted a picture of a unique style of groyne that is usually covered with seagulls. Unfortunately the tide was in so not much of the groyne was visible and not too many seagulls. 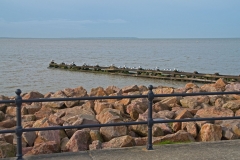 Between Hampton and Herne Bay there is the most impressive row of beach huts anywhere around the coast. We saw one numbered 288 and there were even more in the row. These are right on the shingle beach with steps down onto the pebbles and are just so reminiscent of late Victorian and Edwardian times. Privately owned and brightly decorated they must be retained for their sheer charm.
A wide view of the rear of some of the huts. 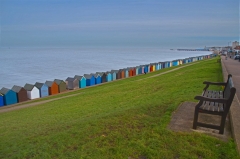 Rear of the huts looking towards Herne Bay, the remains of the pier and, in the distance, Reculver Towers. No ice cream stalls, no amusement arcade, just huts on the beach…..could just as easily be 1913. (Except for the motor cars) Just one of my ‘arty’ pictures.

One of many beach winches. In order to provide a deep water berth for paddle steamers it was necessary to construct a long pier out into the estuary. The last of three piers was opened in 1899. It was 1.15 km long and people could walk or be conveyed to the end on a tram. The pier was destroyed in 1978 by a violent storm and it was subsequently dismantled in 1980 leaving just an abutment from the shore and the landing stage isolated out to sea. Wikipedia has a good account of the history of Herne Bays’ piers.
This view shows the landing stage more than one kilometre from the shore. This one is for LLL and any other dog lovers.

We met twin Boston Terrier bitches, one was shy but this one was very inquisitive and alert. (I edited out her lead which was a distraction) CREDIT Artistc director...Mrs G. She often picks the views and says she never gets credit.

Another smashing post Grandad, love the bright colourful pictures they have cheered me up on a miserable day, but you were only fooling yourself if you thought we had not noticed the directorial skills of Mrs G behind your more interesting shots.

Terrific photos Grandad. I truly love the scenes of the huts. So colourful in and of themselves they make the beach come alive even in off seasons.

The Boston Terrier is really terrific as well. Just this past month after Christmas I had to put 'Friday' down.

It was time and he is really missed but the breed of this little guy you took a photo of is definitely one I might well be interested in.

Mrs Grandad IS definitely got a good eye as artistic director

Oh so sad to hear the little fellow has passed on, but at least he had a good life with you, get a Westie!

small, good natured, do not shed hair and they fit in the car.

I'm off to Mexico soon but once I'm back and hopefully the weather will be BETTER or, at least, I'd like to see the sun shining just a tad I'm going to seriously start looking. Going to be small, non-shedding, probably a male however I have had females. I'd love to find a young adult or a pup of 6 to 8 months but am not too sure I really want a puppy. On the other hand grandbaby #3 is due mid-March so will also have my hands full this summer with the twins or helping.

On another note and back to the photos I sure like the row of seagulls all lined up and waiting for somebody to throw something into the air. I wonder if they (seagulls) take turns aiming at the roofs of the summer cabins

small, good natured, do not shed hair and they fit in the car.

I agree with you there H

We are not doggy people but our daughter has a little westie cross, she is 11 now so getting on, and she is such an intelligent little dog. I swear she understands every word we say.

And as you say, they don't shed hair and don't smell at all like many other dogs. Here is Millie about a year ago, who could resist those brown eyes? Did anyone see the programme about dogs last night on ITV. Confirmed to me just how intelligent they are, in particular the one that could smell the breast cancer in his owner even though mammograms had been clear, amazing.

Love little Millie and yes those eyes would always get some of my bacon sandwich.

& yes I did see the program last night, really amazing !

Roy's been on at me for a while to get a dog to keep me company while he's off shore at times, after seeing the program last night it made me think again

That's the way Kiya! get a doggy (preferably a Westie)

and then you can take it on lots of walks and have some company while taking some pictures. Although I only have my mate Max at regular intervals I do miss him when he is not here as he gets me out and about, who knows he may appear again this weekend.

I'll maybe think about it more nearer the summer months, Roy's still upstairs in engineering but once he starts to get off shore again I might surprise him................. & myself

My sister in law has a Westie (whose name I'm drawing a blank on but it'll come to me) and has found her to be the best dog she has ever had.

Size wise they're perfect and if they don't shed that is definitely a plus.

about here lately has been the chihuahua. Can't even begin to count the number of rescue groups who are bringing them in from all the 'kill dog shelters' particularly in California. They're cute and apparently smart and loyal etc but some of them are SOOO small and tiny. There are also many groups who bring in Greyhounds who have been retired from dog racing.

One of the most active groups or at least the most vocal are the PitBull advocates. Personally I think the dogs "LOOK" sweet but there has been just so much bad press concerning the breed I could never ever accept having one. Even my home owners insurance wants to know if you have one (and I'm sure would deny your policy if you did OR you'd be paying mega premiums).

A Westie is moving up to being the top #1 or #2 choice. My only problem is they're a rather select breed, not popular around here in that while they can be had it is usually from a breeder and you're getting a puppy. I'm really not sure at all if I could train a puppy. I'd much prefer a really young adult who IS potty trained. Will see this summer. Won't be actively looking but will be 'looking.'

Millie sure does have lovely big brown eyes! Am sure she'd have a blast - her and Max - running about Grandad's beaches

Max does more of a plod now days

Millie is now 11 and getting on for a small dog, still full of life though. She is really grand daughter Hannah's dog and this is a little collage of Millie last year when she came to us on her holidays while her family were away on there's. She had just been clipped so had lost most of her 'feathers'. The small pic was February 2002 with Hannah when she first had Millie and the other was Hannah last September at 15. They have both grown up together. How they will all miss her when she eventually departs.

That is the only downside to having a dog Grandad, they don't age at the same rate as us and we have to see them leave our lives at some point.

I think she is the same age as me, in doggie years

Millie looks really sharp all cut and trimmed. Years ago I had a cocker spaniel and she always looks super sharp when she came from the groomer. Her entire head looked like a seal. She was registered, her coat was gorgeous, her bone structure terrific ........too bad she didn't have a brain in her head. Totally clueless. If she got off the lead she'd just run yapping about and if a car door opened she inside in a flash. Once she fell into the river and sunk like a rock. Never made one paddle move at all with her feet. I darn near drowned trying to fish her out. I always blamed the breeder as breeding for looks and not brain. Had her for 11yrs when she became sort of demented (totally forgot all her toilet training). After "Lacey" I decided I'd never get another dog for 'looks' as having a "brain" is much more important.

Millie is cute. Am sure her and Max would enjoy a plod together in the park.