Back to school, in days past

Back to school, in days past

As the "back to school" season arrives it brings with it the stress felt by parents sandwiched between expensive tuition fees paid for the education of their children and grandparents who nostalgically reminisce on their own childhood times when school and college in Egypt was affordable and arguably better.

In such, moments black and white or sepia school photos from the first half of the 20th century are often retrieved from dusty family archives. 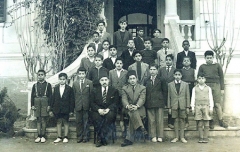 Similar images are abundantly on sale in the book market of Sur Al-Azbakiyya (Azbakiyya Fence), the antique stores of Khan Al-Khalili bazaar, and others on Hoda Shaarawy Street and elsewhere. Their provenance could be Cairo, Alexandria, the Delta provinces or Upper Egypt. Surprisingly, class photographs are little used in academic works that tackle the topic of the history of education in Egypt. Mostly researchers highlight the typical kuttab photograph by Zangaki where the instructor seated on the floor is threatening to hit the students gathered around him with a stick.

As Muhammad Ali modernised education in Egypt in the second half of the 19th century, the kuttab institution gradually went out of fashion and ultimately died out. It was replaced by an array of proper educational institutions ranging from public schools mostly for boys, private Catholic schools that catered to the elite as much as to deprived children in Upper Egypt, and secular English elite schools.

While the outcome of the boys school was the effendis, girls remained house bound until attention was drawn to them by Gasham Hanem, one of Khedive Ismail’s 14 wives. Credit goes to her for setting up the first school for girls in 1873 with the administrative help of Aly Pacha Mubarak who was minister of education, then known as Nazer Al-Maarif (the observer of knowledge). Still extant with its original 19th century building in Sayyida Zeinab district in Cairo, the Madrassa Siufiya is now renamed Al-Sanniya School. However, photos of girls studying at this school are difficult to find. It was already a breakthrough to send girls to school. Perhaps it was deemed too much to have them photographed.

One typical characteristic of these early photographs is that the class instructor, referred to sometimes by the Persian word khoja, and the headmaster were always seated at the centre while the students were gathered around Sometimes the pupils are wearing their tarbushes, even if still in shorts. Rarely if ever a uniform was worn in the earliest school photographs, and especially in the case of male students. Once graduated, the young men became titled in Egyptian society as effendis as opposed to uneducated peasants, the fellahins, or the pashas ranking in the higher echelon of society.

Occasionally, a man wearing the Al-Azhar outfit and headcover appeared in the photos. That was usually the Arabic language instructor.

But school photographs were not limited to students in class groups. Less common but existing are photographs of activities, outdoor sports or even scouts meetings, which are especially interesting because of the appearance of the tarbush.

Many of the these images were found in the personal photograph albums of Mr Abdin, a dedicated headmaster who ran a typical governmental school in Cairo in the 1940s. He was also an accomplished fencer who represented Egypt's official delegation in several international competitions. Thus one can expect that in his school, athletics were highly encouraged. Other than the usual class photos where he features in the centre, he also took a moment to pose with his crew members. In a rare image of its kind, Abdin is flanked by janitors, the porter, the gardener, and cleaners of the school.

School architecture seems to have caught the attention of educational authorities of the 1940s. It is difficult now to match any modern schools with the elegance and functionality of the classical prototype set down, though there is no evidence it was actually implemented in any education ministry construction.

The concept of the class photo seems to have been less common in Egyptian universities. In contrast, in the 1960s, the gardens of Cairo University and its tower clock constituted an iconic backdrop for captures of both male and female college students, whose elegance in fashion is to be admired.

I don't know about Egyptian students studying abroad but one of the things the Saudi students talk about is calling their Teacher by their name. Most of the students want to call their Instructor "Teacher" and invariably ALL the teacher here (well Professors actually) tell them to call them by their first name. Every student here has had a bit of angst at doing this as they fell it is not showing respect to their teacher.

Personally I think most of the University 'Teachers' here would be ok if the Saudi students wanted to call them "Professor" but don't like being downgraded to Teacher hence they offer up their name to the Students.
Top

The tarboosh's being worn caught my eye. I don't know if they were ever called a 'fes' in Egypt but I was interested to learn on a visit to Morocco last year that this traditional Moroccan headgear is now outlawed for whatever reason?

The old pictures, although interesting, are obviously of middle to upper class young people destined to become the Egyptian elite. It says nothing about educating the masses.

The reference to the teacher often shown in a dominant pose reminded me of one of our visits to Luxor temple a few years ago. A party of school children were on a visit with several teachers and a male teacher was slapping some of the children about the head for not keeping up. I remonstrated with him and this just drew a quizzical look from him as much as to say 'what is wrong with hitting the children'. Doesn't look as if much has changed.

On reflection I think it might have been Turkey where the fes is now outlawed. That might make more sense with Turkey hoping to become a mrmber of the EU.

Coming back to education, I think there is too much familiarity in higher education. As a result there then becomes a lack of respect generally. I DO get annoyed when someone I have never met chooses to address me by my first name on the phone or face to face. Particularly when the individual is only about a quarter of my age.

Respect to seniors and elders is dead...

Dead gone, last nail in the coffin, fat lady sang, train left the station ....... yup respect for elders is gone. Respect for many things are gone and I'm really not too sure it will come back. Kids grow up believing teachers are friends and elders are also just people on par with them. And while I think sometimes pomp and ceremony can go too far nowadays there really isn't any. At least, not much here.

If we can't look up to people and the positions they hold I think it diminishes what we aspire to.
Top
5 posts • Page 1 of 1