While AIDS has devastated Sub-Saharan Africa, wiping out entire villages, the race to educated and treat cases of HIV infection is very slow to take place in North Africa and the Middle East. Many activists fear that with ultra-conservative Muslim leaders in power, the job of educating a populace - that largely considers AIDS to be punishment against homosexuals and prostitutes, will suffer a serious setback.

Even worse, many doctors who ply their trades in this part of the world are told that AIDS is a foreigner's disease. As a result, they receive little training in how to treat such patients.

Most Egyptian doctors refuse to treat HIV patients or to deliver their children. Egyptian officials continue to insist that there's no AIDS problem there. To take action,, they reason, would force the government to confront such taboo subjects as homosexuality, safe sex and what Muslim ethics say about how to treat the ill -- however the disease is contracted.

"When the government becomes more religious, they believe AIDS is a punishment from God. But being religious starts with respecting human rights," an Egyptian man who contracted AIDS from a blood transfusion when he was a child says. "We are not a part of the revolution. They isolated us. We did not isolate them."

A telling part on how Egyptian culture treats AIDS patients is through its film industry. There have been only three films that featured HIV patients. In the first film, when a man finds out that he's HIV-positive, he kills himself. In the second, a man kills his HIV-positive son. The third, "Asmaa," in which the protagonist toys with publicizing her HIV status, has been little seen in its home country. 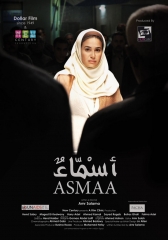 Amr Salama, the director of the movie "Asmaa," about the woman contemplating publicly admitting that she has AIDS, says that he had never met an HIV-positive patient when he started the project seven years ago. In a demonstration on how the topic is forbidden for discussion in Egypt, he admitted that when he began working on the film as a 28-year-old, he feared that he'd contract the virus just by coming in contact with HIV patients.

HIV infections are climbing in only two regions of the world: Eastern Europe and the Middle East. The United Nations estimates that as many as 570,000 people in the Middle East have HIV or AIDS, 40 percent of them women.

According to the United Nations, 70 percent of the men infected are married to women, often to hide their homosexuality.

"The world is talking about the beginning of the end of AIDS. We are not," Wessam not el Beih, the U.N.'s AIDS country director for Egypt says.

One survey reports that 57 percent of Egyptian doctors think that HIV can be transmitted through a mosquito bite. Adding to this culture of ignorance, many patients, unaware of the symptoms or risks, learn only by chance that they've been infected, when a blood test required for a visa or a medical procedure comes back positive.

The director of the HIV program at the Ministry of Health Ehab Abdel Rahman denies that that Egypt isn't doing enough. He notes that in a country of nearly 90 million people, the number of cases is small. Patients receive the medicine they need. The blame, he says, lies with patients who try to diagnose and medicate themselves.

"We always ensure there isn't any defective or shortage of medicine. It has never happened," Rahman said. "Our goal is to have stigma-free hospitals."

Re: Many Egyptian doctors refuse to treat HIV-positive patie

For all that AIDS is hush hush in the middle east it isn't exactly shouted from the balconies here either. Any type of sexually transmitted disease information on a client or patient is basically considered 'top secret' and can't even get entered into the offical record for fear that this will violate existing health information laws and/or get into the 'wrong' hands meaning if somebody other than the client were to request the information under 'freedom of info' and it was written down then "they'd know."

The tight laws 'we' have on these type of diseases makes them also come under the category of "suspect" - in other words that one might have such a disease and it is under such strict control implies a level of immorality or decadence or somesuch.

If our more modern countries can't be open about AIDS and all the ramifications associated with it then I highly doubt countries under repressive regimes were women can't even walk about unveiled would acknowledge it.

I can honestly say I do know that it is recognized in Iraq and there are doctors there are work with the World Health Organization (WHO) to train other doctors re:AIDS and HIV. They also routinely go to sponsored trainings and conferences throughout the Middle East.
Top
2 posts • Page 1 of 1