All 13,000 polling stations in Egypt are shutting their doors after two days of voting in Egypt's first genuine multi-candidate presidential elections. Earlier on Thursday, the electoral commission extended voting hours until 9pm.

While some stations have already begun counting votes, others are still waiting until all remaining voters have cast their ballots.

Military and police are on high alert to safeguard the ballot boxes throughout the counting process. The primary vote count will be performed by the electoral sub-committees inside the polling stations.

Each sub-committee will inform the candidates' campaign offices of the total number of votes cast in their favour.

LATEST
6:04 FINAL results are in from the Upper Egyptian governorate of Qena, according to Al-Hayat TV. A total of 377,092 voters cast their ballot with turnout reaching 23.5 per cent.


3:18 A top judicial source tells Al-Ahram's Arabic-language news website that 1,750 out of more than 13,000 polling stations have returned the following results:

After Egypt's historic presidential poll, countrywide vote-counting continues into the afternoon of Friday; results indicate a hotly contested race and leads change by the hour.

13:30 Final results aggregated by Ahram Online of counted votes in 18 out of 27 governorates (Daqahliya, Sharqiya, Alexandria, Beheira, Gharbiya, Minya, Sohag, Menoufiya, Kafr El-Sheikh, Qena, Beni Suef, Aswan, Damietta, Luxor, Port Said, Suez, Red Sea and South Sinai) show that with 41.6 per cent turnout, Brotherhood candidate Mursi is in first place, followed by Mubarak's last prime minister Shafiq, while the Nasserist candidate Sabbahi, the surprise of this election so far, has fallen back into third place - after the totals of Sharqiya and Sohag governorates were announced. 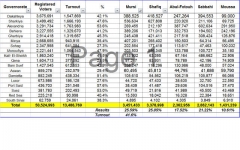 ]
Table showing results of 18 governorates.
Daqahliya, Sharqiya, Gharbiya and Menoufiya
are the weights behind Shafiq's lead.

16:30 FINAL Results in 25 governorates aggregated by Ahram Online shows that with about 41.8 per cent turnout, the Muslim Brotherhood's candidate Mohamed Mursi remains in the lead, followed by Ahmed Shafiq, Mubarak's last prime minister, while the leftist candidate, Hamdeen Sabbahi, who proved to be the dark horse of the race, fell back to third place. Still waiting for Cairo and Giza results, which will be decisive.